The history of the Cheshire Beekeepers’ Association originates with the formation of the joint Lancashire and Cheshire Association in July 1882. This was some eight years after the formation of the BBKA. It was amongst the early County Associations and as far as is known it was the first joint County Association. Amonst the names of the initial committee was one well known today, W. Broughton Carr (of WBC hive fame). During the first year a small monthly Bee Journal called the Beekeepers Record was set up and some eight local Hon. Secretaries were appointed. The Joint Association continued until 1899.

The inaugural meeting of Cheshire BKA was held on 20th February 1899 at Mr Chapman’s Restaurant, Eberle Street, Liverpool. The Rev. T.J. Evans proposed “That in the interests of beekeeping it would be advantageous and desirable that the Counties of Lancashire and Cheshire should be worked separately.” This resolution was passed and the two Counties then held separate meetings.

At the end of the first year, Cheshire BKA membership stood at 323 with a steady increase until 1905. Several bad seasons and brood disease almost brought the Association to an end in 1910. With persistance the Association membership built up to 650 by 1932. Membership peaked at 1536 in 1945. 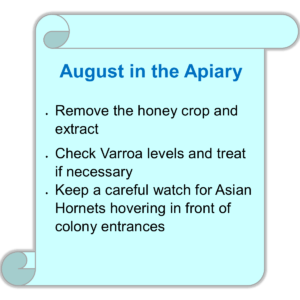 Don`t copy text!
We use cookies to ensure that we give you the best experience on our website. If you continue to use this site we will assume that you are happy with it.OkPrivacy policy